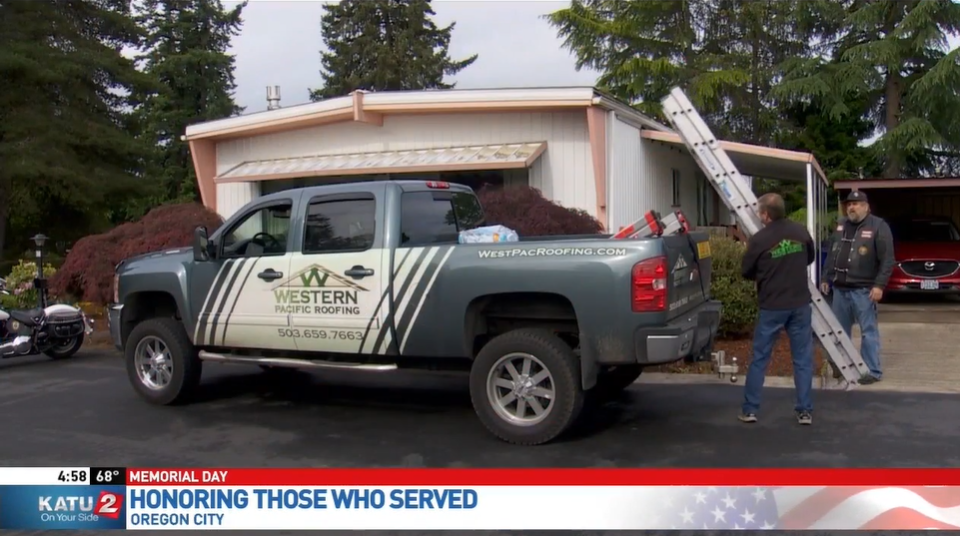 It’s situated on the end of a row of mobile homes at Maple Lane Estates in Oregon City. His home faces a large grassy area and trees; it’s just the space he was looking for. He just moved in a month ago, after six years of waiting.

To him, despite the imperfections, it’s perfect. He knew he’d have a few repairs to make, but it was nothing the World War II Navy veteran wasn’t prepared for.

“The pipes under the house were brass and they were too small, and had to be replaced,” Buddy explained.

Two years later, he’d find himself on the shore of Hiroshima, five days before Enola Gay dropped the atomic bomb on the island. He was prepared to die.

“We were going into Japan and [our captain] told us to write home and say goodbye to our families, because we were going to be dead,” Buddy said.

The atomic bomb ended up saving his life, and he would survive the war, but he does still carry some trauma from his service. Buddy is disabled and suffers from post traumatic stress disorder.

“We ride with those who can, for those who can’t,” Ken “Chopper” Klarfeld, the president of the Oregon chapter of the Disabled Veterans Motorcycle Club, said.

“We thought, you know what, we could expand this to help other disabled vets,” Ken said.

Now, the motorcycle club works to help disabled veterans in a variety of ways, from home repairs to groceries.

By day, Ken is a contractor. That’s how he first met Buddy and learned his story.

“I climbed up on the roof and said ‘oh my goodness this place needs a roof in the worst way,'” Ken said.

Buddy knew his new home would need some work, but a project this big, one that would cost roughly $20,000 according to Ken, was not something Buddy was anticipating.

Ken decided he would work with roofers and other companies to make sure Buddy doesn’t have to pay. The generosity is something that leaves Buddy nearly speechless.

“I never thought a thing like this would be possible,” Buddy said.

If you are interested in learning more or helping the cause, you can get more information by emailing: dvmcinfooregon@gmail.com

Quick turnarounds from initial estimate to completion of your roofing project.

Experts in roof installation and roof repair of all types of roofing, residential or commercial.

© 2006 - 2022 Western Pacific Roofing, LLC. We've been Providing Quality Roofing and Roof Repair Services throughout Oregon and Washington for 16 years. We specialize in Commercial Roofing with expertise in Roof Repair and Residential Roofing. If you're looking for a Roofing Company who knows their roofs, you've found them. Call today for a free estimate!

We recognize that these are challenging times, filled with a high degree of uncertainty. In response, we wanted to let you know we have taken the steps to ensure the ability to inspect your roof, complete an estimate, and do our job while protecting you and our employees! In an effort to continue providing exceptional service for our customers we are still maintaining regular office hours as we have been deemed an essential business. Call by appointment only at this time.

Our main goal is to ensure the health of our customers, team and community members by following the Center for Disease Control (CDC) as well as our local health agency’s advice. In addition to the CDC guidelines, our team is taking the following precautions to prevent the spread of COVID-19: